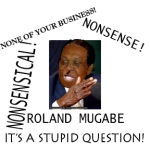 When you hear Julian Rollocks screaming about “the latest rage”, his tears are more for the information that was found in the emails, then they were for any crime. If a crime had been committed against government, then government would have hired lawyers, or used the lawyers already retained on their payrolls, to sue! When I blogged about the USONA funding scams last year, Sara Stone, the woman Julian Rollocks hired to write the request for hundreds of thousands in USONA funding told Elco Rosario, that she was going to sue me for slandering her. Since then, I believe Sara Stone has researched the words “slander”, and “libel”, and realized that in order for something to be slanderous, or libelous, it has to be a lie.

I have not heard from Sara Stone since. I posted the video to the USONA photos to Calypso Baker “ALLA DEM TIEF”. Sarah Stone managed to shut down the video, not because it was slanderous, but because I did not have the proper copyrights for the over 100 photos used, which were taken directly from the Julian Rollocks Hotmail account.

Part of my anger towards Roland Duncan, is when I asked him questions in front of Computer World on the Pondfill, he told me that he was going to have ME arrested, for asking inappropriate questions, I guess.

I was supposed to be the idiot, quivering in fear of reprisal and arrest, when I KNEW who the true crooks were.

So when I treat Roland Duncan with utter disrespect, it’s personal.

Many do not not agree with my approach, and feel that I should be more respectful towards our members of government, Ministers, Parliamentarians etc.

I unlike MOST St Maarteners, believe that respect, like job positions in office, needs to be earned.

Why should I respect Roland Duncan, or his authority, when he shows respect to NO ONE?

Roland Duncan got his job as Minister of Justice, because when he realized that the National Alliance (his former party), would not be in a coalition with the UP party, Roland Duncan started raising questions of Theo Heyliger bribing the police dept, and demanded an investigation.

Roland Duncan got his position basically through blackmail and cronyism. Patrick Illidge, his protege was needed in the forming of the coalition government.

Roland Duncan piggy-backed on Patrick Illidge, and had the ability to make Theo Heyliger’s government miserable, SO HE WAS GIVEN HIS MINISTERS POSITION, he did not earn it, what respect is he looking for?

A MERITOCRACY IS A GOVERNMENT WHERE YOU ACTUALLY EARN YOUR POSITION!

An example of a meritocracy, would be Barack Obama, or Hillary Clintons fight for the White House. Hillary Clinton believed that as the wife of former president Bill Clinton, she had EARNED the right to become the first female president, and what America did, was teach Hillary Clinton that you earn things yourself, not through your husband, not through family, and certainly not through who your friends are in politics.

Barack Obama as a Black man, had to fight harder than any previous president, and EARN his position as president through grueling primaries, public debates, vetting and investigations by the highest authorities in US law inforcement, many people believed that he did not deserve to be president because of the melanin content of his skin.

Barack Obama COULD NEVER HAVE EARNED ANY POSITION IN THE SXM GOVERNMENT, because he would have been an outsider with no family connections, and no friends to get him in.

Barack Obama has EARNED my respect, Roland Duncan and all of his shady activities have not, and that’s why I do not feel the need to treat these “officials” with ANY respect.

You want respect, you earn it.